Home > Blog > A Review of the Highway Code

A Review of the Highway Code

As the UK government launches a public consultation over proposed changes to the Highway Code, we take a look at how these rules of the road have evolved over almost a hundred years.

Every British driver has owned a copy at one point or another. For a dedicated few, it becomes their dog-eared bible, for others, purely a means to an end – a dull but important part of their driving education on the journey to passing a driving test.

We’re referring, of course, to the UK Highway Code.

Now in its 90th year, the Highway Code has gone through many editions. As Britain’s roads, vehicles and technology have evolved, this little book has adapted, expanded and kept pace with the necessary rules and regulations, to promote road safety.

Have your say on the next set of changes

The government has launched a public consultation over new Highway Code proposals, which runs until 29th March 2021. The review aims to improve safety on motorways and high-speed roads, and your views are invited.

The proposals include new and additional guidance on:

There are also suggestions to tweak the guidance in many other areas, including avoiding driver fatigue, adverse weather conditions, driving through roadworks, the use of hazard lights etc.

Find out more, and take part in the consultation process.

How has the Highway Code changed over the years? 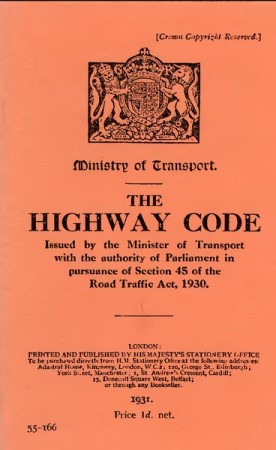 The Highway Code was first published in 1931, but its origins can be traced back as far as 1920, when a compulsory system of arm signals was introduced in London to improve road safety. These arm signals indicated a driver’s intention to turn left, right or stop. In wet weather, the driver could use a dummy arm so his own could stay dry inside the car!

The system was deemed so beneficial, it was decided to require and standardise this code of behaviour across the whole country. Despite good intentions, however, this compulsory code of rules for road users was delayed.

It wasn’t until 1923, following consultation with the police and the Automobile Association, that the Home Office and Scottish Office published a booklet entitled Traffic Signals to be used by the Police and Drivers of Vehicles. By this time the code had been extended to include whip signals for horse-drawn vehicles, and signals made by policemen controlling junctions.

The Road Traffic Act was introduced in 1930, and this led to the first publication of The Highway Code as we know it on 14th April 1931.

This first edition consisted of just 21 pages. It didn’t even mention mirrors, but suggested using the horn to signal an intention to overtake. The next revision, however, published in 1934, was considerably more wide-ranging and included the first illustrations of road signs.

After the Second World War, The Highway Code underwent other major changes. References to trams, for example, disappeared after the 1954 edition, but were reintroduced in 1994 when the first modern tram systems began to appear in Britain.

The fight against a Highway Code

It might seem strange that there could be objections to efforts to promote road safety, but it hasn’t all been plain sailing for the Highway Code.

The pro-safety organisation, Living Streets (originally called the Pedestrian Association). explains how, in the years following the Second World War, they had to fight against those who objected to driving rules and regulations.

“Throughout the 1950’s the Association managed to defend the continued introduction of local speed limits and stave off the process of abolishing them, which was known as “de-restriction”. The fight against de-restriction was a continuous one against those who claimed speed limiting was a breach of the motorist’s rights and freedoms.”

Fortunately, such opinions are rare today, and have no influence.

Does the Highway Code apply to cyclists?

Yes. In fact, it applies to all road users, including pedestrians, cyclists, horse-riders, motorcyclists and drivers.

From its first appearance as a code of behaviour in the 1920s, the Highway Code today is a much stronger document. Advice has been replaced by forceful directions; the Highway Code is the definitive source of information on road signs, road markings, vehicle markings, and road safety for anyone learning to drive in Britain.

But as well as mandatory rules, The Highway Code also contains useful information, advice and guides to other useful resources. There are annexes on vehicle maintenance, licence requirements, documentation, penalties, and vehicle security.

What will the Highway Code look like in the future? You have a chance to shape its future – contribute your views by 29th March 2021.